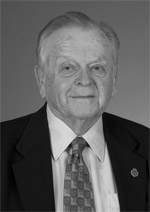 Ever generous with his time and expertise and unwavering in his commitment to excellence, Dale Elwood Smith, 87, died peacefully at his Lake Forest Park, WA home on Feb. 27, 2013.

He was born on Nov. 23, 1925, in Blain, PA to Charles R. and Margaret A (Ritter) Smith. His father, a high school principal, and his mother, a teacher and homemaker. Dale was only 16 when his father died suddenly of a heart attack. He had two younger sisters.

Graduating from Blain High School in 1943 as valedictorian of his class, he was inducted into the U.S. Army later that year. He served as a military police officer in the 10th Mountain Division in Italy during World War II and was awarded the Bronze Star. Soon after coming home, he married the love of his life, Rhobie Charlotte Stambaugh, in Blain on Christmas day in 1946.

Dale, Rhobie, and their four children came to Seattle in 1960, when Dale began a residency in prosthodontics at the USPHS Hospital and the University of Washington. Two years later, he received his MSD degree from the U of W.

Dr. Smith served at the USPHS Hospital in Seattle from 1962 to 1972, receiving the Commendation Medal for Outstanding Service in the Commissioned Corps, attaining the rank of captain and retiring as its dental director.

Dr. Smith held an affiliate faculty appointment at the UW from 1960 to 1972. In 1972 Dale became a full time faculty member in the Dept. of Prosthodontics serving as director of prosthodontic research. In 1980 he became director of the graduate program. He retired in 1993 as a professor emeritus. Dale was a gifted prosthodontist and dental educator who demanded excellence from himself and the many students that he mentored. Dale made significant contributions to the dental literature and was recognized internationally for his knowledge and creativity in the disciplines of removable prosthodontics and dental implants. Many of his former students credit him with setting their careers on the right path.

Dale Smith joined the Academy of Prosthodontics in 1972 and went on to serve as president in 1992 at the meeting in Lexington, KY. He was also a life member and past president of the Pacific Coast Society for Prosthodontics and was awarded the Fred Gulick Distinguished Life Member Award in 2009. In addition, he was a charter member of the American College of Prosthodontists.

He formed many longstanding friendships along the way. He loved fly fishing and the game of golf, traveling far and wide in the pursuit of big fish and challenging courses. He was an ardent fan of baseball, football and basketball.

Dale and Rhobie remained very much in love throughout their 61 year marriage. She died in January 2008, and daughter Gretchen passed away in August 2010. Survivors include three children and their spouses, Laurie Smith of Lake Forest Park, WA, Jerry Smith and Sherry Wartelle of Redmond, WA, Jennifer and Daniel Vradenburg of Issaquah, WA and five grandchildren, Emily and Lindsey Smith, Nicolas and Alison Vradenburg, Kimberly Newman , and several nieces and nephews.