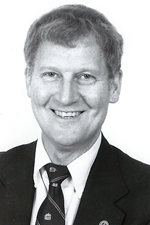 Dr. Dorsey J. Moore was born Feb. 8, 1935, in Boonville, Mo., to Lloyd and Mary Elizabeth Moore. He died March 7, 2016, following a long battle with Parkinson's Disease and diabetes. His wife and daughter were by his side.

Dr. Moore attended CMSU as a music major, but changed to a pre-dental program after his sophomore year. He graduated from UMKC School of Dentistry in 1959 and entered active duty in the U.S. Navy the next month. He served 20 years? active duty, retiring in 1979 as Captain. He served in several duty stations, including Okinawa, the U.S.S. Proteus and Vietnam. He competed his residency in General Prosthodontics and Maxillofacial Prosthetics at the Graduate Naval Dental School at Bethesda, Md., and Georgetown University. He was then assigned to Saigon to teach the Vietnamese dentists and physicians how to treat their own patients who had sustained facial trauma and cancer. He also went into villages to treat patients, and help identify patients needing more extensive care get to the hospitals and clinics he helped establish in Saigon. This work exposed him to Agent Orange, and he was often under mortar attacks. Because of his work there, he was awarded the Legion of Merit with Combat "V." After his Navy career, he returned to Kansas City to become the Hamilton B.G. Robinson Professor and chairman of the Removable Prosthodontics Department and Director of the Graduate Prosthetics and Maxillofacial Program. He graciously shared his wisdom, talent and experience with faculty, students and many facial trauma and cancer patients who had their lives transformed by Dr. Moore's ability and talent for placing facial prosthetics. His passion for his profession brought many opportunities for international lecturing and teaching engagements.

He served as AAMP President in 1979 and was engaged in mentoring Academy Fellows through his contagious enthusiasm. His professional organizations included OKU Dental Honor Fraternity, the Greater Kansas City Dental Society, the Missouri and American Dental Associations, American Academy of Maxillofacial Prosthetics, serving as president, the Academy of Prosthodontics, charter member of the American College of Prosthodontics, the International College of Dentists, and the American College of Dentists.  He will be missed by all who he mentored and his friends and colleagues.

Service photos can be found on the