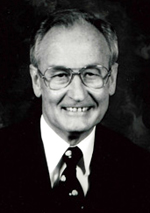 Dr. John Edmond Rhoads passed away on October 22, 2015 shortly after celebrating his 97th birthday.  His death followed a brief illness.

John was born to Dr. and Mrs. Earl E. Rhoads on September 26, 1918. He received his undergraduate education at San Jose State College graduating in 1939. John attended the College of Physicians and Surgeons School of Dentistry, University of the Pacific where he graduated as valedictorian of his class in 1943. While in dental school he married Marjorie (Peggy) Cook. He served in the United States Army Dental Corps from 1943 -1946. Dr. Rhoads held various faculty appointments at the School of Dentistry, University of the Pacific in San Francisco from 1946-1969. He served as Department Chair of Fixed and Removable Prosthodontics from 1949 -1958. John was a Research Associate at The George M. Hollenbeck Research Associates in Encino, California from 1958-1960 conducting dental materials research. He practiced in several locations prior to opening his office in Monterey, California in 1969. Dr. Rhoads was a member of numerous professional organizations during his career. Membership in the American Academy of Restorative Dentistry was one that he held in highest esteem. He was a Charter Fellow of the American College of Prosthodontists. John served on the American Board of Prosthodontics from 1969-1976. He was a consultant to the Veterans Administration Hospitals, U.S. Public Health Service Hospitals and the U.S. Army Medical Department Postgraduate Training Program for many years. John contributed to the scientific literature and lectured extensively.

Peggy passed away in 1988. In 1989 he married Evelyn Gould. She died in 2001 following a lengthy illness. John is survived by four children, 12 grandchildren and 18 great grandchildren.

Dr. Rhoads was a highly respected leader in the specialty of prosthodontics. His personal and professional attributes were exemplary. He will be remembered by all who knew him as the consummate gentleman