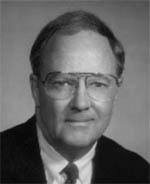 A pebble tossed into a pond sends ripples in all directions.  Such was the life of Noel Wilkie.

Born on the Fourth of July in Powell, Wyoming, he remained a devoted son of that state his whole life.  He was a cowboy at heart and wore his boots with pride.  His continued involvement with the University of Wyoming Alumni Association led to his Presidency.

After graduating from the University of Pennsylvania School of Dentistry, Noel entered the Navy, embarking on a 28 year illustrious career.  He was decorated for his heroic activities aboard the USS Enterprise during a disastrous ?re in which many lives were lost. He later joined the prosthodontic teaching staff at the National Naval Dental School in Bethesda, where he became my mentor. Prior to his retirement, he served as the Commanding Of?cer of the Dental Clinic in Hawaii and Paci?c Fleet Dental Of?cer.

We were reunited at Georgetown University, where he was honored by the students as teacher of the year.  With the closing of Georgetown, Noel joined the faculty of New York University as the director of the prosthodontic graduate program until his retirement in 1994.

Noel enjoyed ?y ?shing for over sixty years, bicycling in charity fund raisers, gourmet cooking and days at the beach.  When we were both in better health, we enjoyed long walks and discussing prosthodontic controversies. He provided thought-provoking and incisive editorials addressing these controversies and others in his ten years of publishing PROSSTARS.  Noel felt strongly that the trained prosthodontist was the best person to supervise the various treatment modalities required by the complex restorative patient.  He also was an advocate of Board certi?cation and repeatedly encouraged graduate students to pursue the Boards.

Noel ?lled many roles in the Grisius family's lives: that of mentor, colleague, friend and 'Uncle Noel'.  We will never forget his love and support during my illness.  He spent long hours in the surgery waiting room with the family, kept friends informed, visited and could always be called upon.  We truly miss his voice on the other end of the phone.

Noel Wilkie served as a role model to me. He was an outstanding teacher, lecturer and writer.  The specialty of Prosthodontics and many of those individuals taught by him are better practitioners because of him.