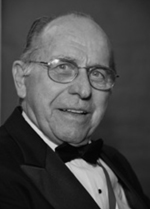 It is with great sadness  to report the passing of one of our illustrious fellows, Aligardas Albert Yurkstas, on November 28, 2006.  He was elected an Associate Fellow of the Academy in 1959 and became an active Fellow in 1962.  Al brought a new dimension to the Academy and the field of prosthodontics because of his deep interest in research.  Prosthodontics at that time was primarily an art, emphasizing technical excellence.  Most discussions were based on empirical judgments.  Al sought scientific objectivity to assess varied approaches and practices in prosthodontics. His work with Richard Manly, Past Director of Research at Tufts University School of Dentistry (TUSDM), devised methods to assess mastication and its various components.  Subsequently, these techniques were used by other national and international dental investigators. Al mentored and inspired many postgraduate students at TUSDM to pursue research in prosthodontics.  His investigations included assessments of different occlusal schemes, biting pressures, jaw movements, denture esthetics, efficacy of various types of denture prostheses and accuracy of methods for establishing jaw relations.  He was awarded the Research Scientists Prosthodontics Award of the International Association for Dental Research (IADR) and the Jerome M. and Dorothy Schweitzer Prosthodontic Research Award from the Greater New York Academy of Prosthodontics.

Al founded the I.R. Hardy Prosthodontic Conference which evolved into the Northeastern Prosthetic Society.  Among the many positions he held, he was a past president of the Robert R. Andrews Society, Omicron Kappa Upsilon, Greater New York Academy of Prosthodontics and Northeastern Prosthetic Society.  He was a member of numerous other professional organizations including the American Association for Dental Research, IADR, Massachusetts Dental Society, American Dental Association, American Prosthodontic Society, American Academy of Dental Science, American College of Dentists, and International College of Dentists. He was also active in many community organizations.

Born on November 25, 1921 in Lawrence, Massachusetts, Al lived over 55 years in Quincy and Scituate and received his education in the Boston area.  After service in the United States Army in World War II, he entered TUSDM and upon graduation in 1949, he joined the faculty there as a Research Associate.  He became Professor and Chairman of Complete Denture Prosthodontics and remained at Tufts until his retirement.  Al made numerous presentations before regional, national and international dental organizations.  Besides his many publications in scientific journals and significant contributions to dental education, he provided clinical care to many appreciative patients in his private practice for over 50 years.

Al was a very conscientious, hardworking individual who devoted his life to his family, community and dentistry.  His door was always open to students, patients and colleagues in need of help. His positive attitude and his jovial personality added to his effectiveness as teacher and mentor.  It was a pleasure to see Al and his wife Lee enjoying friends and colleagues at the various Academy functions.  His presence will be greatly missed.