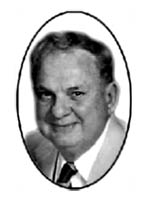 Dr. Henry Edward Ebel was born on February 12, 1924 in Detroit, Michigan. He married Rita on November 20, 1043. They were married for 65 years. They had 10 children (seven girls and three boys), 15 grandchildren and 12 great-grandchildren. He lived in Detroit, Michigan with his family for many years. Two of his daughters were involved in dentistry, one as a trained dental laboratory technician, and another is a dental hygienist. In his later years, Dr. Ebel lived in Canton, Michigan, which is a suburb of Detroit. Dr. Ebel passed away on July 19, 2009. Dr. Ebel served in the United States Army during two wars. He served in World War II as a private first class from September 1943 through September, 1044. He also served in the Korean War as a Dental Officer (Captain) from February, 1951 through February, 1953. Dr. Ebel's career in dentistry began at the University of Detroit, where he graduated from the School of Dentistry on June 5, 1946. He passed the Michigan State Board of Dentistry examination on July 2, 1946. Henry practiced as a general dentist in Detroit for many years. He then decided to study Prosthetic Dentistry. Henry graduated from the University of Michigan on June 11, 1960 with a M.S. degree in Prosthetic Dentistry. Dr. Ebel was very proud of the fact that he passed the Board Examination and became a Diplomate of the American Board of Prosthodontics in August, 1961. He later completed the Michigan Specialty Board in Denture Prosthetics on May 9, 1971. At that time, Dr. Ebel limited his practice to the specialty of Prosthodontics. He was a clinical instructor in the Crown and Bridge Department at the University of Detroit School of Dentistry in 1964-65. He was a Clinical Associate Professor at the University of Michigan School of Dentistry from 1965 until his retirement. He taught graduate and post-graduate courses in prosthetic dentistry. Henry served as Chairman of Dentistry at the Fairland Center of Henry Ford Hospital from 1975 to 1980. Dr. Ebel belonged to a vast array of dental organizations. He was elected to Fellowship in the Academy of Denture prosthetics (Academy of Prosthodontics) on May 14, 1969. He then was elevated to Life Fellowship in May, 1985. Dr. Ebel really enjoyed belonging to the Academy of Prosthodontics where he made many lifelong friends. Dr. Ebel was also elected to Fellowship in the American College of Dentists on October 18, 1972. Dr. Ebel was affectionately known to his family and friends as Hank. Hank's interests outside of dentistry included golfing and extensive traveling. He would travel around the United States visiting his many children who lived outside of Michigan, and travel the country to see various sites that interested both Rita and himself. His travels also took him to Europe, Israel, Egypt, the Caribbean, and Alaska. Hank and Rita would spend the winters in St. Petersburg, Florida away from the cold and snow of Michigan. Hank also loved coin collecting (mostly U.S. coins). During his most recent years, he loved listening to Daniel O'Donnell sing Irish tunes on Detroit Public TV. He was very active in his church parishes over the years. Rita Ebel, his beloved wife of 65 years, recently passed away on February 9, 2010. They both will be greatly missed.