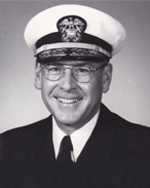 Retired Rear Admiral John B. Holmes was born March 20, 1929 and passed away on February 23, 2018. John graduated with a B.S. from the University of Idaho in 1950 and went on to earn his D.D.S. in 1954 from the University of Washington. He completed the residency program in prosthodontics at the Naval Postgraduate School and earned an M.S. in Education from George Washington University.

John commanded personnel for Naval Dental Operations of the Atlantic Fleet and retired after 28 years of military service. He followed his Naval career by serving at the University of California, San Francisco Dental School as Associate Dean and Clinical Professor of Restorative Dentistry and Chairman, Division of Removable Prosthodontics. John became a member of the Academy of Prosthodontics in 1965 and taught at the Loma Linda Dental School residency program before retiring in his late 70?s.

John was married to Bette for 52 years raising four children, Natally, Barbara, Julianne, and John. We all have very fond memories of John and Bette at the Academy meetings.

John's paper on "The Altered Cast Impression," published in the Dental Clinics of North America, proved so foundational that it remains a standard in dental school textbooks today. John received many awards, among them President of the American College of Prosthodontists and recipient of the prestigious Gies Award for Outstanding Innovation as a Dental Educator. He held office as local chapter and regional president for the Navy League of the United States and performed extensive volunteer work for the American Cancer Society.

John was proud of having worked summers during college in the Idaho mines and maintaining rail for the Canadian railway. He was literally "a steel-driving man." He played Canada's national winter sport of ice hockey from boyhood and became a U.S. citizen in 1953. As a boy, he used to sleep on a cot in the church basement on Saturday nights to keep the coal furnace stoked so the building would be warm for Sunday masses. He was a choirboy from childhood and continued to sing in church choirs into his 80s. John met his second wife, Carrie, when they were singing in an Anglican Church choir. They were blessed with a nine-year marriage of love, companionship and travel reaching to the Arctic Circle. John is survived by his wife, Carrie; his brother, Brian; his four children and their spouses; and grandchildren, Oscar and Luke Witte, and Reagan and Carson Holmes.

John was a man of the highest character who honored God, loved life and knew what it means to serve. Rear Admiral John B. Holmes received full military honors at his funeral and internment in Arlington National Cemetery.