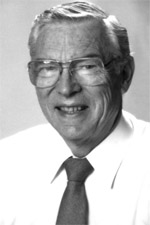 Dr. Kenneth E. Wical was a 1956 graduate of the University of Southern California School of Dentistry where he received his DDS degree. Following graduation, he served in the United States Public Health Service for 2 years by piloting a plane between Native American communities in Utah and Nevada to provide dental care and then 1 year in Barrow, Alaska, dog sledding and piloting a plane to reach Native Alaskan patients in remote villages. Next, he moved to Keene, Texas, where he established programs in dental assisting and dental laboratory technician at Southwestern Adventist University. During this time, he also was commandeered as a college science teacher in biology and chemistry. He would later credit this experience as providential preparation for his subsequent career in dental education. In 1966, Loma Linda University received a federal grant to open a Medical Center in Monument Valley, Utah and Dr. Wical was selected to lead this project. He oversaw the design, construction, and the first 4 years of operation of the clinic that provided the only available dental services to Native Americans in that area. He organized a program whereby dental students from Loma Linda would spend 6-week rotations through the clinic, providing care under his supervision. That clinical facility served the Navajo community for 36 years during which time 43,000 Native Americans received dental care and countless numbers of dental students learned clinical and cultural skills by being of service to others. He was then selected and sponsored by Loma Linda to attend the University of Washington School of Dentistry to obtain an MSD degree in Prosthodontics with an obligation to return to Loma Linda and teach. His area of particular research interests were residual ridge resorption and the effect of dietary factors on bone resorption. He completed his prosthodontics program in 1973 and returned to teach full-time at Loma Linda for the next 22 years as an instructor, department chair, and clinic director. He was renowned for his unfailing kindness and compassion toward students while expecting them and helping them to achieve excellence in prosthodontics. He can appropriately be called a "gentleman's gentleman." In 1992, he was awarded the Loma Linda University Distinguished Faculty Service Award to which he responded, "I do not consider any of what I have done to be noble or sacrificial. I never thought I was making a sacrifice at the time; I was doing what I enjoyed." As an honor to his professionalism, the Kenneth Wical Award for Excellence in Prosthodontics was established in 2006 by the Advanced Specialty Education Program in Prosthodontics to recognize prosthodontists whose contributions to dentistry and prosthodontics model that of Dr. Wical. Ken passed away on July 6, 2012 at the age of 82. He is survived by his wife of 57 years, Virginia, two daughters, two sons, and 4 grandsons.