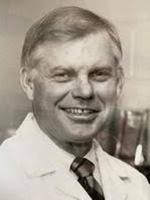 It is a privilege to give the eulogy to this group for Dr. Charlie Ellinger or as his wife would call him, just Chuck. Charlie was a good teacher, a good clinician and most of all one of my very good friends. We first met while standing in line signing up for billeting at Ft. Sam Houston, Texas in 1960 during the Berlin Crisis. After some discussion, we decided to be roommates and our friendship just grew from there. However, our relationship did have its early moments, when out at Camp Bullis, I found out during our first evening, that Charlie was allergic to down filling in the sleeping bags, so I spent 5 nights in a tent with him coughing and hacking, while neither of us got a wink of sleep; but we survived the week still speaking to one another.

We parted after basic training, each going to our various assignments, but were reunited again after about 6 years when I was invited to teach at the University of Kentucky Dental School. I do not think the invite came by accident as Charlie was already on the faculty at the time. Our families became close friends, along with Dr. Jim Terry and is family who were already there. After a couple of years, the three of us separated, but we remained in touch and it was always a pleasure for us to get together, particularly at our Academy meetings. It gave us a chance to reminisce, hoot and holler a bit, and still get educated.

One of the high points for Charlie and Jan, along with the other members of his committee, was to host our Academy’s 1992 annual meeting in Lexington. He loved the city and dental school and he enjoyed talking about both whenever he could. The committee did a great job, and he mentioned many times how honored he was to have had our group there.

There are so many stories I could tell of our relationship, but for the sake of time, I would like to conclude by sharing with the academy who Chuck Ellinger really was. About 1.5 years ago I received a card in the mail from him with a letter enclosed. You must understand he and I rarely communicated in writing, usually by telephone. It was at a time when he was realizing that the Parkinson’s disease was taking its toll. He was having great difficulty in writing and speaking. The card was written by his caregiver with no explanation about the accompanying letter, but for some reason he wanted me to see it. After reading it and wiping away some tears, I know why he was proud of it and I was proud for him. It was a beautiful letter of thanks sent through his daughter and son-in-law and written to him by a former undergraduate student at Kentucky, who along with another student, was caught cheating. They were being kicked out of the school because one had taken a math exam for the other and they needed help at the time from Charlie who was the Ombudsman for the University amongst his regular duties at the Dental School. I would like to share excerpts from this letter with the Academy not using names as some may know the parties involved.

Dear Dr. Ellinger, I want to thank you for having such a palpable and lasting impact on my life. Because of your leadership and balance in handling this delicate issue, you were able to negotiate on behalf of us to receive F’s in our Calculus II classes while getting the “true Privilege” to stay enrolled in the University of Kentucky. Dr. Ellinger, I am so sorry it has taken me 35 years, the death of one fraternity brother, and a powerful reconnection with my friend to write this letter to you. So, I would like to simply say, “Thank you from the bottom of my heart.” You changed my life and I have never forgotten what you did, how you did it, and how powerful it is to give people a second chance. You not only changed the trajectory of my life, quite literally, but you gave me such a powerful life lesson in the process. A life lesson that I carry with me always, that I have tried to impart in my three children, and that I have been working to pay forward over and over again. I have learned that true compassion and care matters the most, at times when it is the hardest to provide. You showed true compassion and care in agreeing to talk with us and in your unfailing support for us in a very difficult time. You showed true leadership in taking on this issue and identifying change that the faculty needed to do in order to follow university policy. And you showed real courage and conviction in your role by putting your own reputation on the line for two boys who had broken the cardinal rule of any university. I want you to know that your compassion, leadership, and conviction has had such a powerful and lasting impact on both our lives, and I think about you and what you did often. Dr. Ellinger, I graduated from the University of Kentucky because of you. I will close by saying thank you and hope that you are able to receive this letter and to know that your impact on me was immeasurable. Thank you for what you did, how you did it and what it taught us. I can’t think of a more powerful gift to bestow on a college freshman than the one you gave to us that has had such a powerful lifelong impact.  Sincerely, Former Student

In my personal closing to this eulogy, I would like to say the Academy has lost a distinguished member and I have lost a best friend.