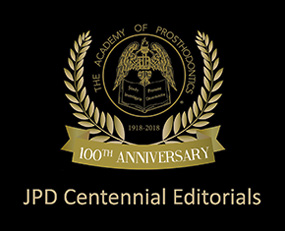 81st Annual Session of the Academy of Prosthodontics

The Academy of Prosthodontics made a return to Canada in May of 1999 to hold its annual session in Calgary. This unannounced theme of this meeting was "Maximized Cooperation." The weather cooperated by warming for our meeting. The Palliser Hotel cooperated by providing a beautiful setting for this meeting. The hotel staff cooperated with a level of efficiency that is unusual in today's day and age. The speakers cooperated by delivering on the excellent presentation put together by Howard Landesman and his committee. Our guests cooperated by coming in large numbers. Finally, the Canadian Government cooperated by making those U.S. dollars go a very long way in this wonderful city.

Social programs began with the Welcome dinner on Thursday evening, May 13. The large turnout for this dinner was a harbinger of good things to come. During the festivities, the meeting was dedicated to Dr. Howard Payne on his attendance at this, his 50th consecutive Academy meeting. Howard's friends and colleagues celebrated and roasted him on this achievement.

The Scientific session was called to order by a particularly subdued program chairman, Howard Landesman. After an invocation by Cliff Van Blarcom, President George Zarb welcomed the meeting attendees. Life Fellows: Ron Desjardins, Alex Koper, John Rhoads and George Smutko, Active Fellows: Larry Breeding, Donna Dixon, Steve Eckert, Rhonda Jacob and H-P Weber, and Associate Fellows: Thuan Dao and Kent Knoernschild were installed by Dr. Zarb. Brian Toolson presented a memorial for Dr. Frank Smith who passed away in the summer of 1998. Andrew Bennett then presented a stimulating discussion of leadership, mixing humor and magic to illustrate his message. The Academy then welcomed the President-Elect of the ADA, Dr. Richard Mascola, who discussed dentistry as an example of health care that works. A multi-media presentation followed from Pascal Magne on the topic of esthetic restorative dentistry. Making the trip from Madras, India, E.G.R. Solomon then presented the esthetic consideration of the smile as it relates to restorative dentistry. Following lunch, Ted Jacobson discussed the demographic concerns for the prosthodontist and John Agar described positive factors regarding the financial rewards of a prosthodontic practice.

Friday afternoon was open for some and full for others. Members gathered for the first business meeting while spouses and companions visited the Glenbow Museum and Prince's Island Park. The evening allowed time for investigation of the culturally diverse city of Calgary.

"Professor" Aaron Fenton began the Saturday session by introducing Rhonda Jacob who provided background information on bias and its effect on scientific studies. Those in attendance separated into small groups to discuss two papers as illustrations of the effect of bias on scientific studies. Lively discussions were found in all corners of the hotel after which the group reconvened to describe the break out sessions. Saturday afternoon provided a social outing in the majestically beautiful Banff area. Shopping, boating, horseback riding and sightseeing preceded a delicious barbecue at the Boundary Ranch in Kananaskis Valley.

Implant dentistry took center stage on Sunday when the first three speakers discussed different aspects of this subject. Joseph Kan provided information on implants in grafted sinuses while Steve Morgano related the effect of differing designs on prosthetic performance in partially edentulous jaws. This was followed by Winston Chee's description of immediate loading of dental implants. Talks then moved to the cellular level when two of our PhD's, Lyndon Cooper and Ichiro Nishimura, provided a glimpse of the future of prosthodontic treatment.

Sunday afternoon was another time for exploration of Calgary. Once again, the weather cooperated by providing a gorgeous afternoon. The evening allowed another gathering at the annual Installation Banquet. A reception, dinner, music and dancing was enjoyed by all.

The final day of the meeting began with Jacinthe Paquette providing compelling material on the use of epoxy dies in fixed prosthodontics. Mark Hochman described a new injection technique for the maxillary arch in which a palatal approach to the anterior and middle superior alveolar is used. Sleep bruxism was reviewed by Gilles Lavigne with different therapeutic interventions described. David Guichet returned the discussion to implant supported restorations when he described a photoelastic study of screw retained and cemented restorations. The scientific session concluded with Richard Ellen describing periodontal care for older adults in song, verse and slides.

The meeting adjourned in the early afternoon on Monday. All agreed that Brock Love and his committee provided us with a wonderful visit to Calgary.